Establishing diplomatic relations 50 years ago was a controversial decision, especially in Israel. With courage and vision, people in both countries contributed to the creation of a tight web of interwoven connections and a palpable sense of community in the present. The exhibition, organized by the German-Israeli Association (DIG), charts the nuanced development of German-Israeli relations with all of its highs and lows. Special focus is placed on the people behind the headlines, whose efforts ran alongside official diplomatic cooperation to generate interpersonal and often very close relationships.

At the end of the 1940s, after the Shoah and at the time when both Israel and the Federal Republic of Germany were founded, there was silence between Germany and Israel. And yet very early bridge-builders began to emerge on both sides who would lay a foundation for new relations through personal and business contacts – outside of official diplomatic channels. May 12, 1965, saw the establishment of official diplomatic relations between the Federal Republic of Germany and the State of Israel.

Since then, much has happened. Today, German-Israeli relations are marked by liveliness, diverse cultural exchange and dialog – but also by conflicts. The exhibition highlights the people whose personal commitment made it possible to forge close connections in the contexts of culture, business, politics, science, literature and music. Today, exchange programs are widespread: City partnerships, school and youth exchanges and scientific cooperation represent the foundations upon which relations continue to develop. The exhibition tells moving personal stories and features previously unpublished historical photographs and literary sources. The lasting image is one of a tightly interwoven relationship that has grown out of fifty years of personal connections and official diplomacy.

Read more about the exhibition 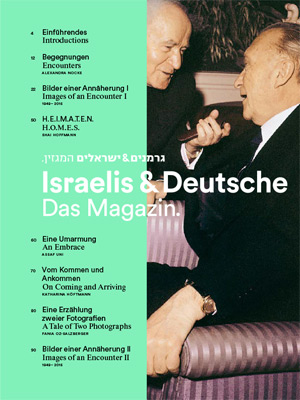 Following its stay in the Bundestag, the exhibition “Israelis & Germans” organized by the German-Israeli Association (DIG), goes on tour. From Wednesday, November 18, 2015 until Saturday, December 5, 2015 the exhibition will be shown in Passau.

On October 29, 2015, the tour of the Hebrew language version of the exhibition started in Tel Aviv before moving on to Beer Sheva, Haifa and Jerusalem.

See all dates of the tour

The traveling exhibition is organized by the

Supported by the Federal Foreign Office

For continued support we wish to thank

This traveling exhibition is part of a series of events commemorating 50 years of diplomatic relations between Germany and Israel.